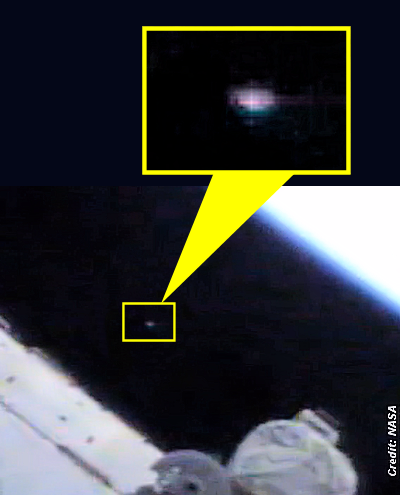 Remember that classic scene in John Carpenter’s “The Thing,” where the alien shapeshifter sprouts king crab legs from the severed head of an ice station member, then scuttles off along the floor and tries to hide in a storage room? Kurt Russell manages to hose it down with a flamethrower before it can find other hosts. Ultimately, though, it’s too little too late. If only the crew had been just a tad more alert a little earlier …

Well, The Thing — or at least one of its tropes — jumped the fence at NASA’s Johnson Space Center this week and went global when a camera aboard the International Space Station apparently recorded unidentified images outside the craft. The blogger who noticed and posted — Scott Waring of Taiwan — is an old hand at combing through NASA stills and footage. At his UFO Sightings Daily website, entries are interpreted by text like “NASA Photo is proof of Apollo 20 mission,” “Buildings On Mercury in NASA Photos,” “Alien Pyramid Found On Asteroid RQ36,” and “Alien Structures On Saturn’s Moon Iapetus.” For whatever reason, the mainstream media pretty much ignores these scoops.

But that all changed on Monday, when JSC’s hometown paper, the Houston Chronicle, swiveled a light onto Waring’s screengrabs of not one but two UFO encounters webcast by the ISS. In the first, allegedly from Aug. 4, Waring stated he was watching the live feed when the elongated object neared the orbiting lab, then momentarily broke away to a blue screen, which the video appears to confirm. Three days later, on Aug. 7, Waring noticed yet another sequence; in this one, the object was starlike, but much brighter. Just for the record, De Void rarely has kittens over ambiguous vids of night-sky blips, and these looked like yawners. While there was no feedback from NASA, the Chronicle reported the “online community of UFO true believers is bustling with excitement.”

And then. One day later. Tuesday. The New York Daily News. Reported a third ISS/UFO video had surfaced. In this one, four dim lights in diagonal formation are shown dimming out beyond the space station. And it’s either beneath NASA’s dignity to comment on mystery skank or nobody’s even bothered give ‘em a buzz. The Washington Times weighed in on Wedneday. Again, no NASA feedback.

By Thursday, this, well, This Thing had hopped the pond and was rousing the Brits. “Watch mystery ‘flying disc’ UFO spotted on NASA space webcam seconds before video stopped working,” crowed the Mirror. The Mail described “UFO enthusiasts” as “in a frenzy.”

Granted, none of the aforementioned got famous for their high-brow sobriety. But they’re reaching large audiences and today, even CNN piled into the scrum. With a mixture of snark and bewilderment — and still no NASA participation — its online piece concluded: “Though it may seem these advanced beings have accomplished much right in our neighborhood, they haven’t learned not to fly within eyeshot of a space station the size of a football field (including the end zones).”

ould the space agency have stopped The Thing from going viral? Probably not; authority-figure prophylactics ain’t what they used to be. But with the MSM beginning to pile on, De Void left messages with the ISS ground-support team at JSC a few days ago. Still no reply. Which is kind of a shame because it gives sensationalist bloggers a license to dream up any kind of irresponsible headline they want.