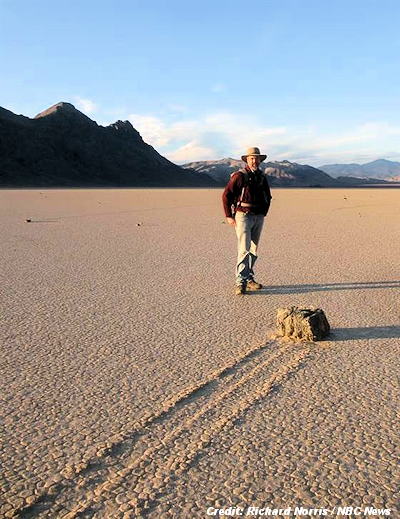 The first witnesses to an enduring natural mystery are an engineer, a biologist and a planetary scientist who met thanks to a remote weather station.

This odd group has captured the first video footage of Death Valley’s sailing stones creeping across Racetrack Playa. For a century, these eerie rocks and their long, graceful trails have stumped visitors and scientists. The boulders of black dolomite appear to move on their own, sliding uphill across the playa’s flat lakebed. The trails are the only evidence the rocks move. No one has ever seen them set sail.

Lacking direct evidence, explanations for this geologic puzzle ran the gamut, from Earth’s magnetic field to gale-force winds to slippery algae. Now, with video, time-lapse photographs and GPS tracking of Racetrack Playa’s moving rocks, the mystery has finally been solved.