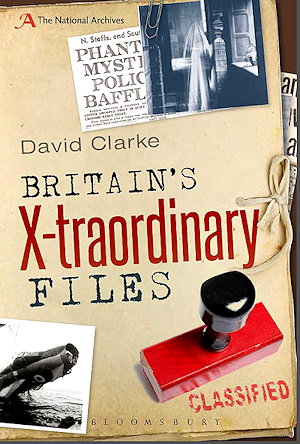 My latest book opens The National Archives’ own ‘X-files’ to shine a spotlight on many formerly secret official accounts of uncanny phenomena and other unsolved historical mysteries.

From mediums employed by the police to help with psychic crime-busting to sea monster sightings logged by the Royal Navy, Britain’s X-traordinary Files

is the result of 15 years research in the archives at London and elsewhere.

Each section is underpinned by images of key documents created by government agencies that have investigated and sometimes tried to exploit extraordinary phenomena or powers in recent history.

the seven chapters throw new light on rumours, legends and persistent mysteries. Some of the subjects covered by the book include:

• The Angels of Mons that were said to have saved outnumbered British troops in Belgium at the outbreak of the First World War one hundred years ago.

• War Diaries and other documents that reveal what happened to 266 British soldiers that ‘disappeared into thin air’ during the Gallipoli campaign of 1915.

• The Death Ray and rumours of secret weapons spread by intelligence agencies between and after the two world wars.

• Scotland Yard’s use of a Dutch clairvoyant to find the ‘Stone of Scone’ stolen from Westminster Abbey in 1950.

• Secret ‘Remote Viewing‘ experiments conducted by British intelligence agencies in the aftermath of 9/11.

• MI5 investigations into reports of mysterious lights and ‘crop circles‘ in WW2.

• The extraordinary trial of a London man who was found guilty of killing a pedestrian he believed to be a ghost.

• British Army investigations of dowsing and other extraordinary powers to locate buried bodies and mines.

• Results of inquiries into the mysterious disappearance of British aircraft and their crews.

• What the British government records say about the fate of captain and crew of the Mary Celeste.

• The future King George V’s sighting of a phantom ship, The Flying Dutchman whilst serving in the Royal Navy.

Britain’s X-traordinary Files is published by Bloomsbury on 25 September 2014 and can be pre-ordered here:

I will launch the book with an illustrated lecture on the Angels of Mons and other legends of the First World War at Sheffield’s Off The Shelf literary festival on 27 October.

‘This is a feast of a book, valuable above all for folklore studies but also for parapsychology, history and hard science; and the more important for having grounded itself in the most prosaic of sources, the official records of the nation.’

‘In this entertaining and absorbing book, David Clarke excavates hidden marvels from the depths of The National Archives, casting new light on our uncanny world – from death rays to ghost ships and angels.’

Dr. David Clarke Offers a Rebuttal To Stanton Friedman’s Review of His Book:
The UFO Files – The Inside Story of Real-Life Sightings