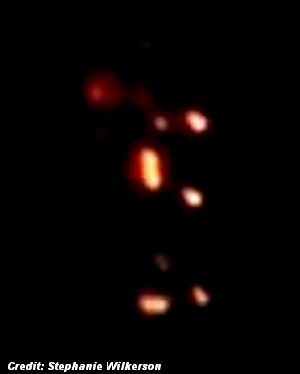 Unknown flashing lights from the unidentified flying object even left the local police without an explanation.

There is no question in Stephanie Wilkerson’s mind about what she saw in the night sky this week.

When a giant circle of flashing lights appeared over her Pennsylvania home, she ran to grab her neighbour who brought his binoculars to take a closer look.

After the lights started to change colour, the pair called 911 and began filming the strange sight on a mobile phone .

In an interview with ABC New, Stephanie said: “I thought it was a plane until I realised it wasn’t moving.”

“I watched it for about 20 minutes and I started noticing it changing colours,” she added. . . .

UFO Caught on Camera in Pennsylvania, as Reported on Good Morning America | VIDEO