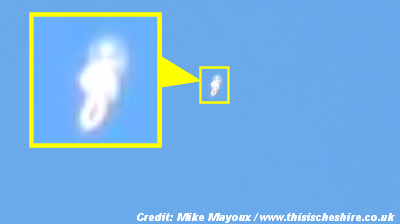 Could there be UFOs over Cinnamon Brow?

A READER has got in touch after a mystery sighting over Cinnamon Brow at the weekend.

Mike Mayoux said he spotted the object in the sky around 6pm on Sunday and is wondering if anyone knows what it could be.

He added: “My wife saw two of them at first but I saw five before going inside to get the camera.

“By the time I came out with the camera, I could only see one left which I photographed using a superzoom camera at full zoom.

“I have no idea of what it is, nor am I saying it is UFO, just some strange objects in the sky which appeared to be moving very slowly but were very high. . . .

Strange UFO Spotted in in the Skies Above Wigan (UK)