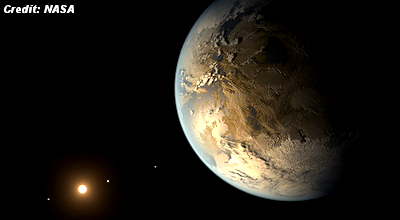 Sniffing Out Alien Life: Stinky Chemicals May Be Key

If Professor Hubert Farnsworth’s “Smell-O-Scope” actually existed, astrobiologists would have pointed it at dozens of alien planets by now.

The Professor’s odor-detecting invention, which was featured in several episodes of the animated sci-fi series “Futurama,” would be a good life-hunting tool, researchers say, because alien organisms may betray their presence by pumping stinky chemicals into their home planets’ skies.

“I joke often that maybe you want to smell for life on other planets instead of look for it with a telescope,” Shawn Domagal-Goldman, a scientist at NASA’s Goddard Space Flight Center in Greenbelt, Maryland, said last month during a NASA panel discussion about ancient Earth and habitable exoplanets.

Domagal-Goldman and other researchers spend a lot of time thinking about the best biosignatures, or signs of life, to look for in the atmospheres of faraway planets.

Two good candidates are oxygen and methane, both of which disappear from atmospheres without replenishment. While each substance can be created by geological as well as biological processes, detecting both oxygen and methane in an exoplanet’s skies simultaneously would be strongly suggestive of alien life, many scientists say. . . .