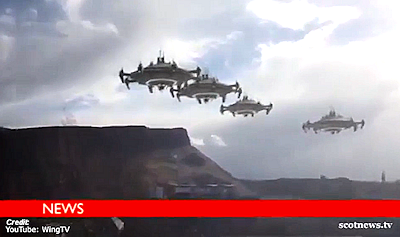 ‘I tried to convince the world of an alien invasion’

A UFO hoaxer who failed to convince the world of an alien invasion has won a short film award with a documentary mocking his dreadful effort.

Scotsman Bill Walsh set out to make create world panic with an elaborate UFO hoax in April this year, but it turned out to be a total flop.

What started as a simple computer-generated UFO grew into a fully-fledged fake TV news report claiming to show an alien invasion in Scotland and England.

. . . But the project has not been a total loss with the filmmaker recently winning the top prize at the Edinburgh International Film Festival with a “mockumentary” about the failure. . . .