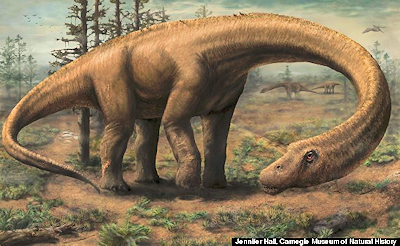 Say hello to Dreadnoughtus schrani, a newly discovered dinosaur that was so formidable, it was named after a battleship that prowled the seas during the early 20th century.

“It is by far the best example we have of any of the most giant creatures to ever walk the planet,” Dr. Kenneth Lacovara, a paleontologist at Drexel University’s College of Arts and Sciences and the scientist who discovered the skeleton, said in a written statement. “With a body the size of a house, the weight of a herd of elephants, and a weaponized tail, Dreadnoughtus would have feared nothing.”

The titanosaur’s skeleton, which dates back 77 million years, was discovered in Southern Patagonia in Argentina, and unearthed over the course of four digs between 2005 and 2009. . . .

Extraterrestrial Minerals, The End of Dinosaurs and Colossal Asteroid Impact!