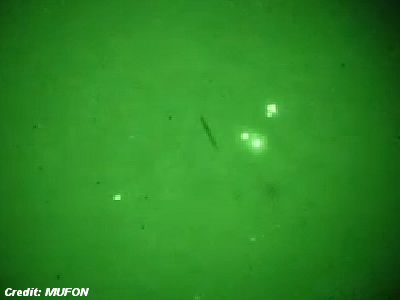 A military combat instructor says he caught a UFO on video that could not be seen by the naked eye. He described the object as a “Slow flying, low, silent, see-through triangle.”

We recently posted a story about UFO sightings from the North Carolina beaches near the town of Wilmington. We received many responses from others in the area who also had sightings. However, one of the most spectacular cases we received is this one from Leland, North Carolina, which is on the northwest side of Wilmington.

This case was sent to us by a field investigator with the North Carolina chapter of the Mutual UFO Network (MUFON), Kenneth Bates. Bates says he believes the craft caught in this video, “while probably not alien, it is a video of a craft that possesses very advanced technology: (1)the ability to ‘cloak’ itself and (2) a reflective component that gives the illusion of transparency.”

He stresses that he, the director of North Carolina MUFON Lakita Adams, and the witness, all feel that the UFO is most likely some sort of advanced military aircraft with a cloaking device. . . .