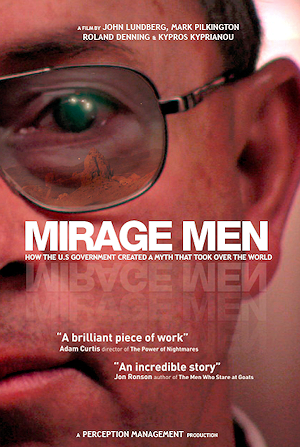 A nest of weasels

If you ever want to dissuade the uninitiated from going near The Great Taboo, show them “Mirage Men,” the 2013 documentary based on Mark Pilkington’s eponymous book. Guaranteed to make an honest broker erupt in hives at the mere thought of parting the veil around the UFO mystery, “Mirage Men’s” anatomy of a government disinformation program is brilliant propaganda, and delivered with the sort of polished confidence that could easily make the “Frontline” rotation.

Directed by British crop-circle debunker John Lundberg, “Mirage Men” focuses largely on the activities of Richard Doty, the now-retired USAF Office of Special Investigations agent who screwed several UFO researchers with phony conspiracy yarns and created enough paranoia to put one of them in a psychiatric ward.

Like the book, “Mirage Men” operates on the premise that UFOs are hokum, and inflated by a counterintelligence network determined to conceal its black projects behind a smokescreen of imaginary space aliens. As Pilkington asserts in the documentary, “The UFO mythology develops of its own accord, and the mirage men will just drop a new piece of data, a new meme, some new fake documents into the mix as and when it is expedient for them to do so. And there’s no real need for a sustained UFO deception campaign because the folklore is just perfectly capable of sustaining itself.”

Embroidering its narrative with snippets of ancient Hollywood flying saucer flicks, the doc does a clever job of presenting UFOs as an exclusively pop-cultural phenomenon, circa 1952. No mention, of course, of the scientists and Air Force officials who established the independent reality of UFOs in 1948’s Project Sign because that would’ve complicated Pilkington’s premise. But no matter. The real value of “Mirage Men” is watching a hack like Doty justify his mission on camera.

Doty, who has the bland countenance of Kevin Spacey’s office manager in “Glengarry Glen Ross,” was working OSI at Kirtland AFB in New Mexico in the late 1970s when he was assigned to neutralize an electronics entrepreneur named Paul Bennewitz. Bennewitz, described as a flag-waving WWII veteran, recorded strange lights, and other things, near Kirtland and alerted military authorities to what he claimed were UFOs. The “Mirage” storyline is that Bennewitz was unwittingly monitoring classified earthly technology, and that somewhere in the chain of command, it was decided the best way to work this thing was to encourage Bennewitz to believe he’d actually stumbled onto ET. Spoonfeeding him loads of steaming crap, the ruse went on for years and provoked Bennewitz into sharing his increasingly fantastic “discoveries” with politicians and news media, which wrote him off as a kook. Bennewitz eventually lost his business and submitted to psychiatric evaluation before his death in 2003.

Listening to Doty’s spin, years later, is to behold the very portrait of epic gall: “I actually sat down with Paul and said to Paul, ‘Listen Paul, I think you oughtta stop doing this. I think you’ve gone as far as you can go, and this is a friend, this is Richard Doty, a friend,’ it wasn’t Richard Doty, a special agent with OSI talking to him. I said ‘This is a friend talking to you, Paul,’ because I became a friend with him because he was a very wonderful person, and I didn’t want to see him harmed, and I said ‘Paul, stop it, listen to your son, listen to your wife, end it.’”

A friend? Holy *@!#, this guy Doty is a reptile. But at that point in the psyops campaign, nothing Doty could do or say could derail Bennewitz from his sacred destiny to find the space aliens. But Doty didn’t stop there; his BS would go on to burn researchers Bill Moore and Linda Howe, whose stories are well documented. What lingers now are the echoes of this blithe functionary’s twisted reasons for cooperating with the documentary in the first place. Doty, the admitted liar, now insists 20 percent of the UFO coverup stuff he was putting out there — he never gets specific — is actually true. So open wide, kids, here’s another meaningless mouthful:

Doty is a radioactive specimen you wouldn’t trust if he pointed out that your own hair was on fire. “You’re looking at Richard Doty,” concludes another researcher, “and by looking at him, you’re taking a glimpse into a whole machine that now has a life of its own.” Maybe that’s true. And if Doty’s self-serving confessional is what passes for contrition these days, shoot me your email and I’ll forward you a Nigerian cash transfer proposition you’re gonna love. Yep, “Mirage Men” wants you to walk away from this whole UFO scene in disgust. To that end, it’s an incredibly effective piece of work.

Echoes From the Past: The MJ-12 Disinformation Scheme Still Reverberates