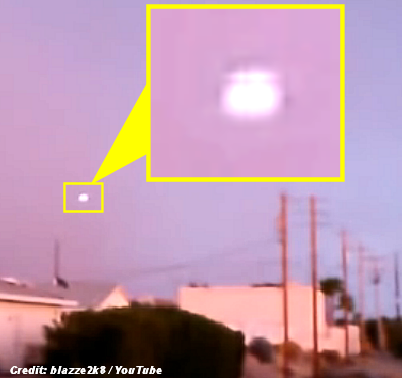 A witness captured video of a strange light in the sky over Lake Havasu City, Arizona on the evening of July 14, 2014.

The unidentified light hovers in the sky, then slowly descends into what the witness surmises is SARA Park in the southeastern park of the city. Although the witness states that the object changes color, that behavior is not apparent in the video.

Local paper Today’s News-Herald says that “no reports of alien activity or strange aircraft have been reported at SARA Park on July 13 or the following days.” But Dennis Freyermuth, chief investigator for the Phoenix Mutual UFO Network (MUFON) is investigating the sighting. The paper explains that Freyermuth could not confirm any aircraft activity in the area on the evening in question. And, unfortunately, he has not been able to locate any additional witnesses. Even the four witnesses who were present when the video was recorded have been “unavailable.” . . .