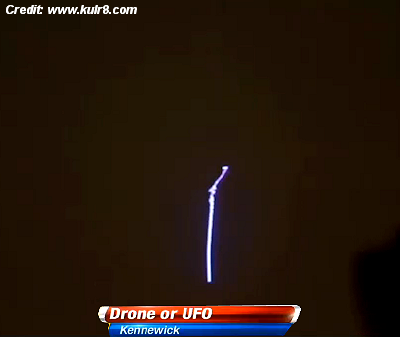 KENNEWICK, WA- A Kennewick resident saw a flying object Sunday night around his neighborhood and was unsure if it was a drone or a UFO.

People would probably be alarmed if they saw a flying object in their neighborhood at night, especially with new aircraft technology being used to spy on people or to take pictures.

David Friehauf said he was walking his dog when he saw what he thought was a UFO flying in the sky and ran in to get his camera.

Friehauf works at the airport and said he is familiar with aircrafts. He said the purple lights on the flying object he saw, made it hard to tell what it was.

“We looked up in the sky and there was this bright purple light just darting all around. It was too high up to be a toy. I just thought it was really strange,” said Friehauf. . . .