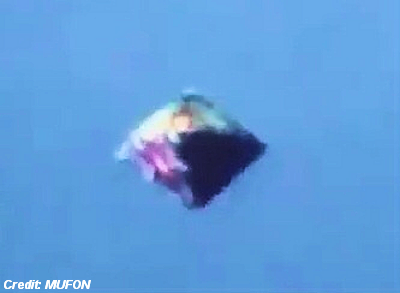 A New Jersey witness at Sayreville reported watching and photographing a diamond-shaped UFO moving at the treetop level, according to September 9, 2014, testimony in Case 59688 from the Mutual UFO Network (MUFON) witness reporting database.

The witness was outside with his dog at 7 a.m. on August 29, 2014 when an object in the northeast sky appeared to be a drone or someone playing with a remote control aircraft.

While it seemed early in the day for remote control aircraft, the witness decided to take out his cell phone and shoot three images of the object.

“The object was diamond-shaped but concave towards the bottom,” the witness stated. “The back almost looked like something out of a movie like it would have engines off the back only it wasn’t moving in the direction the engines were facing. I was able to see this object for about a full minute and-a-half to notice it had what looked to me like a glass area in the front side for observation.” . . .

Is Whitstable a UFO Hotspot?