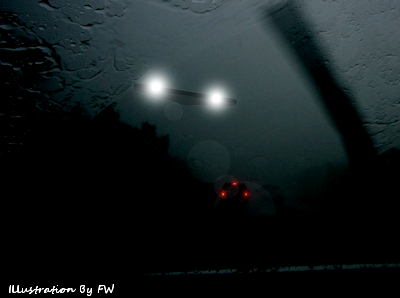 Â  Â  Â An Indiana witness reported watching a triangle UFO silently hovering over a highway near a downtown area about 9:10 p.m. on September 7, 2014, according to testimony in Case 59692 from the Mutual UFO Network (MUFON) witness reporting database.

The witness â€“ who reported the sighting on September 9, 2014 â€“ did not name the town in the public portion of the report. She was driving in the downtown area during a thunderstorm when an object was seen approaching at a low altitude.

â€œIt was a very large triangle and the lights on the outside seemed like they changed from green to white,â€ the witness stated. â€œThere were no red lights at all on this craft.â€

The witness watched the object as it moved through the area.

â€œThen very slowly and silently it hovered for a moment over a building near an intersection where I caught a red light. I nearly hit a parked car trying to observe it and cars coming at me seemed like they were veering to look it also.â€

The witness tried to listen for any sound coming from the object.

â€œThen it changed direction to move southwest and even though it was storming out I tried to listen for sound by rolling down my car window and heard nothing. It moved slowly at first and then like a shot it was gone.â€ . . .

Triangle UFO Above Germany Leaves Questions In Its Wake | VIDEO