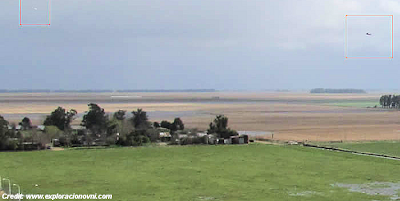 Â  Â  Â  I have contacted the newspaper “La Voz del Pueblo” to ask the original photograph UFO incident in San Francisco De Bellocq. Fortunately I have received full-resolution image. It’s amazing what I saw in it. . . .

â€¢ I have ruled that the cause is due to errors in photography or smears on the lens or birds.

â€¢ I can not relate the objects aeroanÃ³malos image artifacts or known craft (airplanes, helicopters, drones). Moreover, the main object in relation to the distance, appears to have a considerably large size.

â€¢ Analyzing the image in various photography software I could see that the image has not been edited, plus the date of creation thereof as declared by the witness.

â€¢ I have tried to contact the witness and person who took the photograph AndrÃ©s Stessens, but after 4 days I have not received a response.

Based on what was said above, in the analysis of the image, I can classify this case as a UFO , because I could not find a natural or logical reason to explain this fact. (Suggestions accepted by other researchers or witnesses.)

I thank the newspaper “La Voz del Pueblo” (Digital Edition) for Argentina for sending the original photograph and giving me details of the incident.