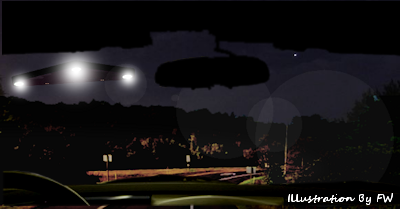 Â  Â  Â Maine witnesses at Augusta who had just left I-95 north at exit 109 reported watching a hovering triangle UFO under 500 feet that made no sound about 8 p.m. on September 7, 2014, according to testimony in Case 59680 from the Mutual UFO Network (MUFON) witness reporting database.

â€œWe all noticed something hovering in the sky on the opposite side of the highway in front of us,â€ the reporting witness stated. â€œIt was triangular. It was not moving.â€

â€œAt each vertex of the triangle there was a white light. The three lights appeared equidistant from each other. We could see a flat bottom and the light allowed us to see a 90-degree angle where the bottom met the edges that then moved up to give the object height. Most of us couldnâ€™t stop looking at the edges because they were not anything like any aircraft that we are familiar with.â€

The witness described the objectâ€™s color.

â€œWe could see that the object was a flat metal color. It had no shine to it. Where the light hit the object, it looked like a tin color. There were no color lights at all.â€

The entire family was witness to the event. . . .