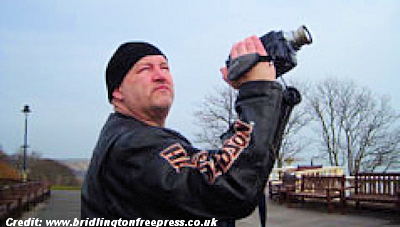 UFO Documentary to be Filmed in Bridlington

Â  Â  Â A UFO investigator is calling for anyone in the Bridlington area who believes they may have seen a UFO, to appear in a new documentary.

Russ Kellett, of Filey, is widely regarded as one of Britainâ€™s foremost UFO investigators and has appeared in both national and international media to talk about his encounters of the third kind.

Russ said: â€œI want to speak to anyone who believes theyâ€™ve had a genuine encounter of the third kind.

â€œThis part of England is a real hot spot for UFOs – I have seen things you wouldnâ€™t believe and plenty of people from the Bridlington area have told me about their own sightings.

â€œA lot of people who come to me with their stories want to remain anonymous, and I can understand why.â€

Over the years Russ and his colleagues has amassed a collection of what they believe is genuine proof that aliens have visited the Bridlington area.

Now Russâ€™ notoriety has prompted a film company to produce a documentary about his life as a UFO investigator, which will appear on Channel Four or Five. . . .