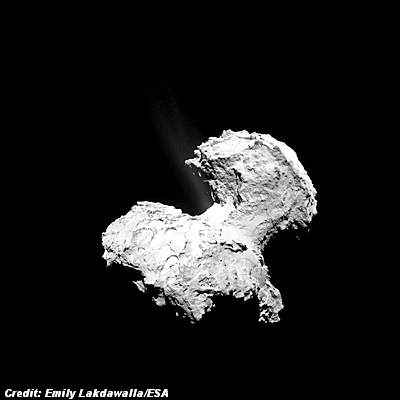 Â  Â Â The Rosetta spacecraft has discovered all the elements of life in the gases jetting from a comet as it approaches the Sun.

The ingredients that make up amino acids, lifeâ€™s building blocks, are all contained in the tail of the comet 67P/Churyumov-Gerasimenko (67P/C-G). Among them are methane, methanol, CO2, ammonia and water. All proteins are made of amino acids.

If Rosettaâ€™s lander, Philae, discovers complete amino acids when it reaches the cometâ€™s surface in November, it would support the hypothesis that life on Earth was seeded by comets with complex organic molecules as well as water. . . .

MARS: “News [of Life] Would Trigger a Revolution in Human Perspectives Not Seen Since Copernicus”