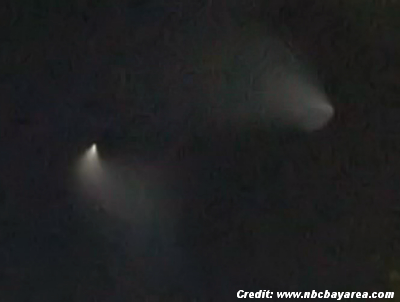 Â  Â  Â A UFO appeared in the skies above northern California in the early morning of Friday, September 12.

At least thirty witnesses in the bay area watched the strange object streak across the sky at approximately 6:00 a.m. Some describe the object as a white light, while others say it was orange. But the light was seen with â€œfog or smoke billowing outâ€ behind it. Among the witnesses is a police officer from Sacramento. . . .

. . . The strange object that streaked across the sky remains unidentified. . . .