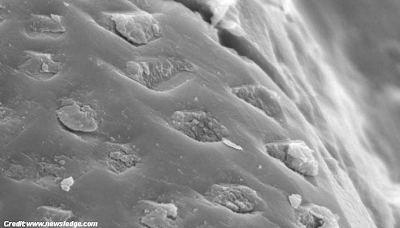 Â  Â  Â A fragment of a 1.3 billion year-old Martian meteorite is creating some buzz in the scientific community. No, itâ€™s not quite a UFO touching down and aliens strolling out, but itâ€™s a start. A new study in the journal Astrobiology shows off the finding of a cell-like structure embedded in the meteorite fragment.

The find by UK and Greek scientists also showed the structure once held water, a key building block of life. Researching the meteorite, known as Nakhla, Dr. Chatzitheodoridis discovered the unusual feature embedded in the rock. Teaming up with UK researchers, they were able to uncover the structure.

What does this mean? It bolsters the theory that beneath the surface of Mars, the building blocks of life once existed. It is possible that Mars life formed and evolved over time. Looks like the Curiosity rover has a mission now. . . .

Evidence of ET Life in (Another) Mars Meteorite?

Green Meteorite May Be from Mercury, a First