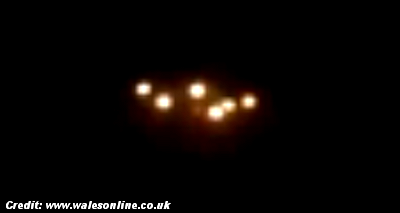 UFO NEWS: Passenger spots series of strange lights beside his plane as he flies into Cardiff

A plane passenger coming back from holiday was captivated by these strange hovering lights which he watched for several minutes from his plane window as his flight approached Cardiff.

The 29-year old said: “We were flying from Greece to Cardiff. It was on Tuesday night and happened about 20 to 40 minutes before we arrived at 10pm.

“The lights could have been from a few miles away – it was pitch black outside, so it’s hard to say what it was.

“It was quite weird. It was very bright, it was the brightest thing I’ve ever seen. I just realised how bright it was and said to my girlfriend ‘look at that!’

“I was staring at it for a while before I picked up my phone to film it, but it was there for about three or four minutes.

“I thought it maybe could have been lanterns, but they didn’t go away, they kept flying til I couldn’t see them anymore.

“I really have no idea what it could have been – it was just really, really bright.

“UFO is a really broad term. That’s what it is, you know, an unidentified flying object.” . . .

UFO Sighting Caught on Tape From Plane Over Beirut “Will Blow Your Mind!” says YouTuber (Video)