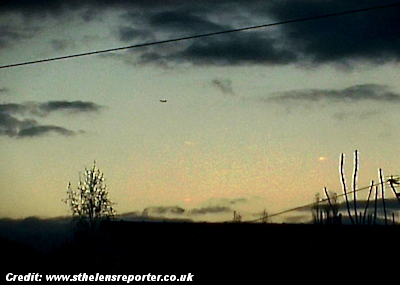 A baffled reader has sent in this picture which he believes shows a UFO flying over St Helens.

Â  Â  Â The 39-year-old spotted the object hovering over fields near Sutton at around 7pm on Monday night.

He told the Reporter it appeared to hang in one spot for almost a minute before darting suddenly to the right, then disappearing out of view.

Before the object vanished, the father of two managed to capture this image on his mobile phone.

And he insists it was not a Chinese lantern – or an ordinary aircraft.

â€œTo be honest, before Monday I didnâ€™t have any firm opinions either way but this has changed my mind,â€ he said. â€œIt has really fascinated me. It just hung there in a way normal aircraft donâ€™t. . . .