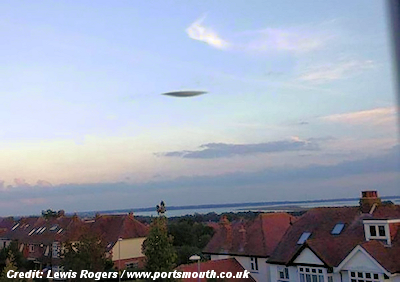 UFO NEWS: â€˜UFOâ€™ Photographed Over the Skies of Portsmouth (UK)

Â  Â Â  A grey-spherical object has been seen floating around in the sky, and claims it could be a cloud, an airplane or a bird have been shot down by those that have seen it.

Johnny Blackwell, 23, of Trevor Road, Southsea, said: â€˜I donâ€™t believe in UFOs, but when I saw this I didnâ€™t know what it was.

â€˜It didnâ€™t look like a cloud, and it was moving very fast.

â€˜It was a grey, disc-like shape, which I know sounds like a stereotypical UFO, but thatâ€™s what it looked like.

â€˜I donâ€™t know much about military crafts, but this was very fast-moving and very odd to see.â€™

Johnny, a television and film production student at the University of Portsmouth, said he saw the object at around 7pm on Tuesday.