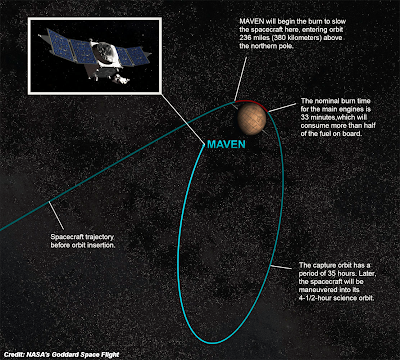 Â  Â Â  A NASA spacecraft built to study the atmosphere of Mars like never before will arrive at the Red Planet tonight (Sept. 21) and you can watch it live online.

After 10 months in deep-space, NASA’s Mars Atmosphere and Volatile EvolutioN (MAVEN) spacecraft is expected to enter orbit around Mars and begin a one-year mission studying the planet’s upper atmosphere. The Mars arrival will cap a 442 million-mile (711 million kilometers) trek across the solar system.

“So far, so good with the performance of the spacecraft and payloads on the cruise to Mars,” David Mitchell, NASA’s MAVEN project manager at the Goddard Space Flight Center in Greenbelt, Maryland, said in a statement. “The team, the flight system, and all ground assets are ready for Mars orbit insertion.” . . .