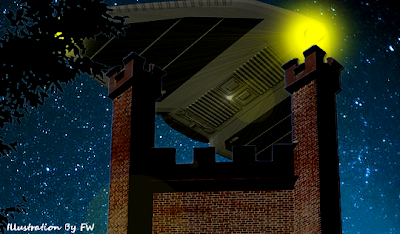 Â  Â  Â  A New Bern woman and her son saw a triangular UFO shortly after leaving church Wednesday evening, and reported the incident on the national radio talk show, Coast to Coast AM, hosted by George Noory.

The woman was later interviewed by the National UFO Reporting Center and stated that the incident happened at about 8:50 a.m. According to the report, her son pointed and told her there was â€œsomething very big in the sky.â€

â€œWhen I looked up,â€ she told NUFORC, â€œI saw a large dark triangular mass blocking out the sky. Its dimensions were 300 feet by 200 feet. The only color you could see was a yellow light at each corner of the triangle.â€

â€œThe mass moved very slowly and if you werenâ€™t paying attention it would just look like a dark night out because the mass was almost camouflaged in the sky. It didnâ€™t make any sound and headed in a south west direction.â€ . . .