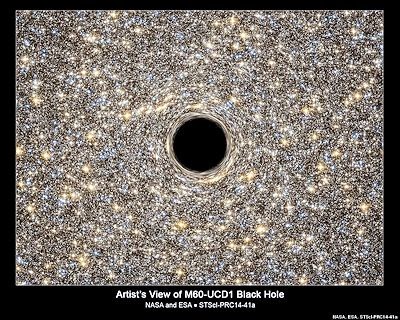 The supermassive black hole is about five times more massive than the one at the center of the Milky Way, but the dwarf galaxy in which it was found–known to astronomers as M60-UCD1–is about 500 times smaller than our own galaxy, according to NASA.

“It is the smallest and lightest object that we know of that has a supermassive black hole,” Dr. Anil C. Seth, a University of Utah astronomer and the lead author of a new paper about the discovery, said in a written statement. “It’s also one of the most black hole-dominated galaxies known.”

The discovery suggests that supermassive black holes may be twice as numerous in the nearby universe as previously thought, Nature reported.

Adding to the wonder is the fact that the dwarf galaxy is absolutely chockablock with stars. Someone living on a planet within M60-UCD1 would look up to a sky containing at least 1 million stars. The night sky here on Earth shows about 4,000 stars.

The discovery suggests that there are many other small galaxies containing supermassive black holes. What’s more, it suggests that dwarf galaxies like M60-UCD1 may actually be the remnants of larger galaxies that were ripped apart by collisions with other galaxies. . . .

Twins! Another Black Hole Found in One Galaxy