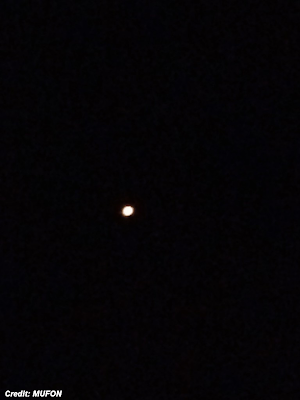 Â  Â  Â  An Alaskan witness at Eagle River reported watching a â€œball of lightâ€ UFO that appeared to move intelligently with hovering and course correction movements, according to testimony in Case 60040 from the Mutual UFO Network (MUFON) witness reporting database.

â€œIt was a dark sky with light cloud coverage and a ball of light was apparent,â€ the witness stated. â€œIt did not have the shape of the Northern Lights. I thought the object was a meteor but it never picked up speed.â€

The witness decided to take pictures of the object. Five images were submitted with the MUFON report, which was filed on September 24, 2014: Image 1, Image 2, Image 3, Image 4 and Image 5.

The witness described the objectâ€™s distance and size.

â€œThe object was a little difficult to estimate due to the distance but I believe it was possibly the size of a car tire. It came toward my direction slowly, appeared to hover, and then adjusted course and left gracefully within 10 seconds. I was worried because I wasnâ€™t sure what it was and it was coming within my vicinity. I watched the object leave.â€ . . .