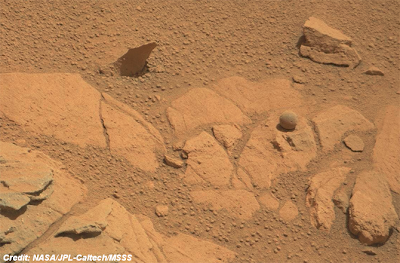 Â  Â  Â If thereâ€™s one thing to be said for Curiosityâ€™s mission on Mars so far, it certainly hasnâ€™t been boring. Although the six-wheeled rover has taken thousands of photographs of Martian rocks, the rich diversity of Marsâ€™ landscape has provided many beautiful examples of planetary geology and some geology that is downright weird.

Take this recent photographic example from the Mars Science Laboratoryâ€™s Mastcam camera that was uploaded to the missionâ€™s photo archive on sol 746 (Sept. 11). While compiling a mosaic of images of the surrounding landscape, Curiosity captured a rather un-Mars-like shape atop a rocky outcrop.

Thereâ€™s a perfect-looking sphere sitting proudly on a flat rock surface. Itâ€™s dusty, but under that dust it appears a little darker than the surrounding rock.

At first glance it looks like an old cannonball or possibly a dirty golf ball. But knowing that Mars is somewhat lacking in the 16th Century battleship and golf cart departments, there was likely another answer. Of course itâ€™s nothing man (or alien)-made, despite what your brain might be telling you. Itâ€™s another fascinating rock. Yep, itâ€™s a spherical Mars rock. . . .