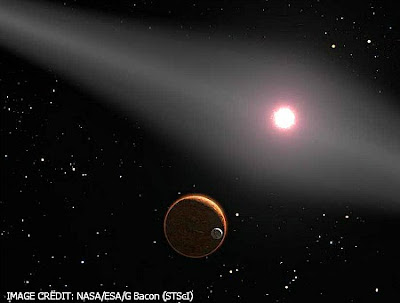 So What Really Goes Down if We Find the Aliens?

Â  Â  Â If we trip across life that’s not of this world, do we blast it or befriend it? What impact would it have on our society?

This was the topic of a two-day symposium held at the John W. Kluge Center of the Library of Congress last week. Several dozen researchers — astronomers, philosophers, theologians, biologists, historians, and other tweed-jacketed specialists — opined on what might happen should we find we’re not alone.

A lot of the discussion, unsurprisingly, was about discovering life that’s intelligent. This prompted a symposium leitmotiv that was dished out repeatedly: when thinking about aliens, beware of anthropocentrism. In other words, don’t assume that they will be similar to us ethically, culturally, or cognitively.

Well sure, I can get down with that. I agree that we tend to view everything in the universe through the prism of our own natures. Mind you, I note that the squirrels in my front yard seem to do the same. They’re awfully squirrel-centric. That ensures that they attend to activities that are truly important (mostly acorn management). I don’t think less of them for that.

Where this leitmotiv became more than a neo-Greek caution against hubris was when it was used to argue that SETI (the Search for Extraterrestrial Intelligence) is fatally flawed. We were told that our hunt for aliens assumes that they are like us. That kind of provincial attitude, it was said, will doom SETI to endless frustration. If we don’t think outside our own biological box, we’ll fail to find any company in the cosmos. . . .

Will ET Be Here Soon? NASA Brings Scientists, Theologians Together To Prepare

“… Avoid Contact with the UFO Elephant in The Room …”

“…UFOs are Most Definitely Off the Table”