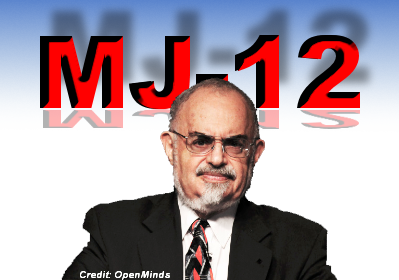 Â  Â  Â I have always had a grudging admiration for Kevin’s ability to write fiction. Anybody who can write many dozens of novels deserves respect. I guess I can accept a smart computer that somehow says the opposite of the truth about the CT Memo. At least we both agree it is not signed and there is no /s/. But why not note that the absence of signature is a sign of genuineness? We didn’t know until well after the memo was discovered that Cutler was out of the country at that time. Why didn’t the supposed (mythical) hoaxer merely add one or the other?? He is accused of adding Truman’s signature. Why accuse me of saying the latter was an exact match to the one on the Bush letter? It was Kevin not me that said “exact” match. I have accepted the official findings of forensic document examiner Black as stated to Dr. Robert M. Wood that it was appended because of the feathering. Ike might well have preferred documents with signatures. Even Karl Pflock agreed that the CIA could have copied the signature.

Yes, let us talk about provenance. What is the basis for the claim that all leaked documents have a provenance? In this case the Provider of the EBD was guilty of a crime. A hoaxer wasnâ€™t. As Kevin knows full well photographing and distributing a TOP SECRET Restricted document to somebody without an appropriate security clearance and need-to-know is a violation of the law. Hoaxing generally is not. Why not just say “gotcha?!” Suppose the CTM was taken by one of the declassifers (all of whom had high level clearance) and put in a jacket pocket and then later placed in Box 189? Two step process. Nobody would tell me their names.

Yes, let’s not argue about the distance to the crash site. We have a highly classified preliminary briefing about an extraordinarily important event which happened 5 years earlier. The approximate distance really doesn’t matter. Which route was taken?

How did the (mythical) hoaxer know that, contrary to the official claims made, that TOP SECRET RESTRICTED was in use?? Psychic I guess. How did he know that Donald Menzel would pass muster as having a very high security clearance and a very long connection with the NSA â€¦ psychic I guess.

I never talk about Willingham. What is meant by “we believed”? As Tonto said to the Lone Ranger: what do you mean “we”, white man? Why is it the fatal flaw? I know that I do not have access to classified files at Sandia or elsewhere and so far as I know, Kevin doesn’t either. That he didn’t find anything about an “El Indio- Guerrero” crash in the unclassified world means nothing. Any information about a crashed saucer recovered on December 6, 1950, and taken to Sandia would have been highly classified just as was any analysis of the Roswell, Plains of San Agustin, or Aztec crashes. December 6, 1950, was the date of a major security alert involving motion of an object(s) in the sky. Roswell and Kenneth Arnold were highly publicized events. The Plains and Aztec were not. I strongly recommend the outstanding and comprehensive research about Aztec done by Scott and Suzanne Ramsey as reported in “The Aztec Incident”… Bruce

Maccabee and Grant Cameron have written about the Dec.6, 1950 national security alert.

I don’t think Kevin has provided some sort of statement that this preliminary briefing would provide a listing and details of all saucer crashes. The first one provides the basic data saying Man is not alone… an incredibly important statement. The Briefing of Ike at the Pentagon on November 18, 1952, only lasted under 50 minutes. As stated “It should be regarded as introductory to a full operations briefing intended to follow.” Introductory surely doesn’t mean comprehensive.

I certainly am not impressed by a kind of guilt by association with Richard Doty and the Aquarius documents. Let us look at the EBD, CT, and TF. No, I don’t want to get into the false testimony of Frank Kaufmann and others. At least he admitted he had lied about taking Blanchard and Marcel to the Debris field. I still would like to know from those who say the 3 documents are phony and why they make that claim. How did anybody know the details that unexpectedly turned out to be true???