Ministry of Defence, Britain: You Can’t Have It Both Ways

“This is a huge embarrassment for the MoD and will have UFO enthusiasts up in arms. When the government said that all its UFO files had been released, conspiracy theorists didn’t believe everything had been made public and it turns out they were right. The 18 files include ones from RAF radar specialists and from the ultra-secretive Defence Intelligence Staff, so there may be some fascinating revelations still to come”

In 2008 Britain’s Ministry of Defence (MoD) famously announced that the entirety of their yet unreleased files which related directly to the UFO matter would be declassified and made public over a number of years. This process was supposedly completed in June, 2013 with the release of the last batch of files to the British National Archives. It was one of the largest reviews of MoD files on such a narrow topic in decades. The public and the press were told that this laborious task effectively concluded the MoDâ€™s holding of classified UFO files.

Unfortunately, we have been misinformed.

On the 25th of August, 2014, researcher Andy Russell submitted an enquiry to the MoD regarding the holding of unreleased UFO files. His stimulus for this action seems to have been a review of the well-known and well-verified claims of retired United States Air Force (USAF) Sgt. John Burroughs regarding the Bentwaters Air Force Base/Rendlesham Forest UFO events of 1980. The enquiry to the MoD was treated as a submission under the British Freedom of Information Act (FOIA) and was duly replied to by the FOI desk on the 11th of September, 2014. A web-based image of the reply letter, as mandated, also appeared on the MoD’s FOI responses of the week listings. In this reply letter, with the name of the enquirer redacted (blacked out) a short excerpt of the original letter to the MoD is included. It sums up the request as follows:

The MoDâ€™s 2 page response, with page 1 included below, outlines that a number of files â€“ 18 to be exact â€“ were indeed found within the MoDâ€™s systems; and, as we shall see, they may be rather significant. The MoDâ€™s response also stated that the files will be released to the The National Archives. However, no one at the MoD or the National Archives will be working up a sweat to redact, declassify and open them for public consumption because the time frame for this process is indicated to take around 9 months. As for the actual MoD response in imaged form: 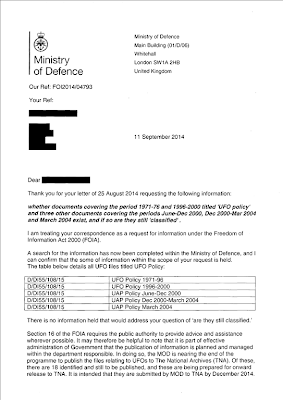 If this isn’t enough to raise the eyebrows of UFO researchers, the second page of the MoDâ€™s response most certainly will. Unlike previously released UFO files â€“ the vast majority of which contain civilian reports, standard internal memoranda, enquiries from the public, etc â€“ that have titles as innocuous as “DEFE-24-2019-1”, these 18 newly “discovered” file titles appear to be much more specific, and, quite possibly contain some of what we cherish: rare, verifiable, undeniable evidence that something pretty noteworthy is being monitored in the skies and investigated by certain specialized agencies within a modern defence establishment. The second page of the MoD’s response is imaged below. One only needs to study some of the acronyms and terminology in the titles, which I will be discussing at length, to realise that there is much we have not been told. 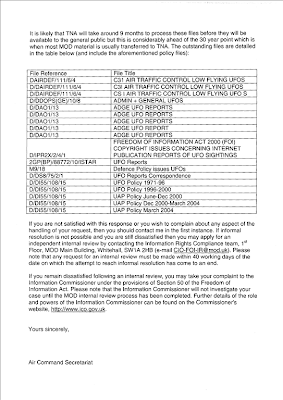 In my yet-to-be posted Part 2 of this particular file fiasco, I will be discussing the files themselves by file-title, and the possible contents of such files. I will also be touching on the extraordinary history of British MoD incompetence, misinformation, and, at times, blatant dishonesty regarding their treatment of the UFO matter.