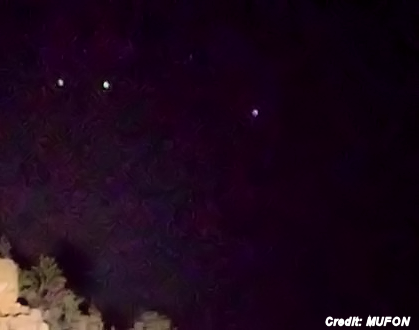 Â  Â  Â A Colorado witness at Idaho Springs reported watching three bright light UFOs that moved â€œstraight up into the cloudsâ€ about 1:16 a.m. today, according to testimony in Case 60176 from the Mutual UFO Network (MUFON) witness reporting database.

The witness was working the night shift at the twin tunnels when he stopped to take a photograph of the tunnel and mountain.

â€œSomeone else noticed the lights and pointed them out to us,â€ the witness stated. â€œMyself and many others all watched as they slowly flew straight up into the clouds. It was overcast and a bit foggy so they had to be pretty close. I didnâ€™t realize until later that I had taken pictures of it.â€ . . .