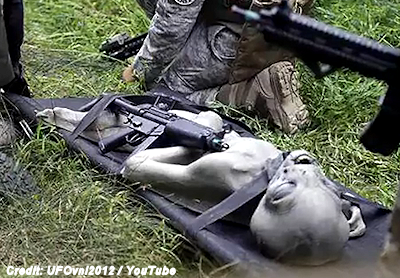 Video of alleged alien recovered by the military goes viral

Â  Â  Â A video posted a few weeks ago of what appears to be an alien being recovered by the military has gone viral. It has racked up nearly one million hits since the writing of this story. However, a UFO researcher did some digging and found out it was actually part of a mock military battle in which teams try to recover a fake alien from a crashed spacecraft.

The video in question (seen above) was posted by YouTuber UFOvni2012. OVNI is a term for UFO used by Latin countries. In Spanish it stands for â€œobjeto volador no identificado.â€ The phrase is also used in Italian and French.

The person who posted it presumably does not speak English as their primary language, as their English is a little rough. The video starts with the words: â€œA UFO could have been an accident. The military had taken a dead Alien. Apparently they hid hidden the discovery [sic].â€

The video then goes on to show an image of an alien strapped to a stretcher with a military-style machine gun. The stretcher is surrounded by men in cammo with patches on their arms, and can only be partially seen in the edges of the picture. . . .