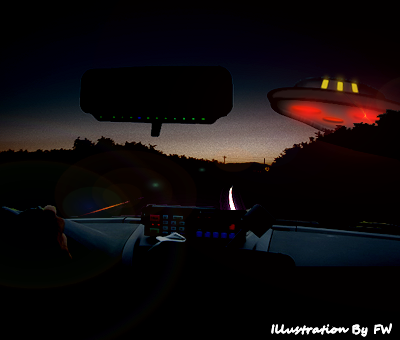 Â  Â  Â A new witness came forward today adding a third 2014 date to close encounters with a UFO near ground level in Joplin, MO, according to testimony in Case 60172 from the Mutual UFO Network (MUFON) witness reporting database.

. . . â€œI work in law enforcement as a State Trooper so donâ€™t want my real name used, but felt it was important to let someone know what I saw,â€ the witness stated. â€œI want you to know that Iâ€™ve never seen anything like this before and hope I never do again.â€

â€œA light caught my eye to the northeast of my position low at the tree line. As I drove closer I slowed the vehicle because at first I thought that it must be a helicopter since whatever it was, was so low, that it couldnâ€™t be a plane. I then noticed that there was structure to the object and that it began to move slowly west towards the highway and closer to my vehicle. There were no other cars on the highway at that time.â€

The trooper moved closer to the object.

â€œAs it got closer and as I drove closer I noticed that the top portion of this teardrop or triangular-shaped craft was elevated and that there were windows along the top portion. The windows were rectangular and placed vertically, and there were three that I could see from my position. There was a yellow/white glow coming from inside the windows. I did not see any people inside but did see movement â€“ I assume it was the occupants moving around.â€ . . .

UFO ‘Bigger Then a House,” Reported Over Joplin Missouri