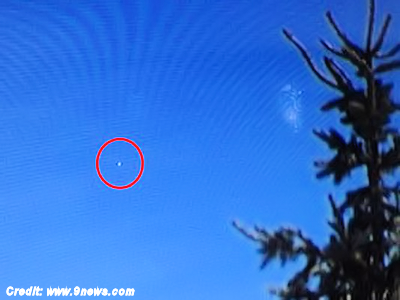 “NORAD is not tracking any anomalies in that location. We are investigating,” said Army Major Beth Smith, NORAD spokesperson.

Multiple people have called in to report the objects floating in the sky. The Summit County Sheriff’s Office is also investigating.

Police have called the FAA. The FAA says they have not had any calls from the public regarding the sighting.

Witnesses say the objects would sometimes form triangles or straight lines across the horizon.

9NEWS reporter Matt Renoux said he doesn’t believe the objects were drones or weather balloons, because the objects appeared stationary for as long as 15 minutes at times.

“They would just sit there… without moving an inch on our viewscreen in the camera,” Renoux said during a 5 p.m. live report.

After about 15 minutes, a flash of light would appear and the “objects would take off across the mountain ridge,” Renoux said. . . .