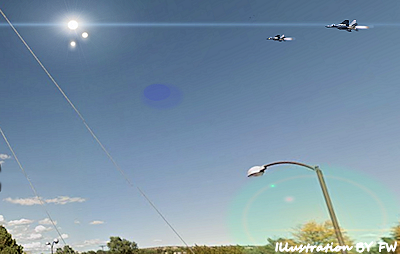 Â  Â  Â At 3:39 pm I was looking up to see jets flying when I noticed an orb like object hovering at a high altitude in the sky. I pulled over to observe the object at Palmer Park and Academy in the Leon Gessie pizza parking lot.

I quickly saw a second object exactly like the first and then in a matter of moments saw a third to the west of the 2 in what appeared to be a symmetrical triangle. Jets were making passes by the 2 closest to my vantage point. Then suddenly the 3rd at the tip of what was the triangle formation started moving quickly west. It made no sound and left no com trail. It was followed by the F-15s and they did not return to the 2 objects that remained. They were orb like, round, reflective and glimmering white. They were very high in the sky at what seemed to be about 30 thousand feet or higher.

They remained perfectly in line with each other as they slowly moved out of sight due to cloud cover and the suns direction. The sighting lasted about 50 minutes.

This was absolutely astounding! I did get video and pictures on my cell phone which did not due the event justice. There were also other people who observed them as well. Amazing! I have never experienced anything like this. I can not explain what I saw. I truly believe what I saw were UFO’s. . . .