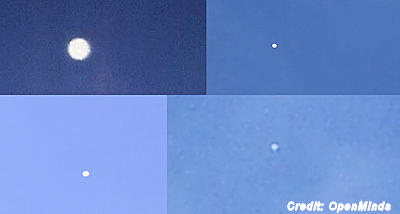 Â  Â  Â  UFO sightings in Colorado and Utah have been under the spotlight after a local TV news reporter spotted UFOs himself and caught them on camera. Case reports from the Mutual UFO Network (MUFON) reveal recent similar sightings over the past several weeks from both states.

County and local police in Colorado have been investigating UFO reports there with a comment from NORAD that no anomalies have been tracked in that area. Fox 13 in Salt Lake City, Utah, covered the story too of unusual objects spotted in the sky.

Multiple Colorado witnesses are reporting the same UFO in both daytime and nighttime sightings over the past few weeks, according to recent MUFON case reports. There have been a total of 27 total UFO reports since September 1, 2014.

MUFON Science Review Board Director Robert Powell, reached in Texas yesterday, said an investigation has begun and that MUFON is looking into how some of the cases might be the same object.

â€œAt least 11 of those 27 reports are related to the same type of object,â€ Powell said today. â€œThe characteristics are daytime sightings, usually early morning or late evening, of circular orb-type objects at high altitude. There is a good possibility these are the Google Loon balloons.â€ . . .