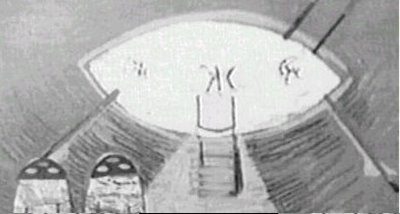 They had small heads and wore silver overalls, apparently

Â  Â  Â  Extra-terrestrial contact has already been made â€” at least if you believe a report that ran 25 years ago Thursday, on Oct. 9, 1989, in the Soviet press agency TASS.

On Sept. 27 of that year, according to the official report, tall three-eyed aliens with small heads showed up in the city of Voronezh, arriving in a shiny ball (or, alternatively, a â€œbanana-shapedâ€ object) and bringing with them their robot. â€Scientists have confirmed that an unidentified flying object recently landed in a park in the Russian city of Voronezh,â€ an Associated Press translation of the report read. â€They have also identified the landing site and found traces of aliens who made a short promenade about the park.â€ They left behind them â€œtwo pieces of unidentified rocks,â€ made of a substance that â€œcannot be found on Earth.â€

When pressed, TASS stood by the report. In fact, the agency could add more details a few days later, the New York Times reported. For example, aliens were wearing â€œsilvery overalls and bronze boots.â€ . . .

The 1989 Rash of UFO Sightings in the Soviet Union