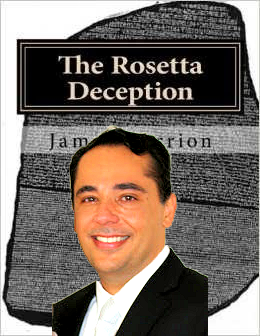 Considerations of the Work of James Carrion

Â  Â  Â James Carrion is a writer, researcher and former intelligence analyst. No stranger to the UFO phenomenon, for a while he occupied the hot seat at the Mutual UFO Network. In his latest blog post, he identified what he termed “the smoking gun” of an intelligence operation theorized in his book, ‘The Rosetta Deception’, available for free on Carrion’s blog site of the same name. He recently launched the Rosetta Deception Forum, a message board where you can post questions, discuss the book and share related research.

‘The Rosetta Deception’ contains a substantial amount of cited research focusing upon parts of 1946 and 1947. A series of well sourced events and circumstances are presented that suggest the “ghost rocket” reported sightings over Europe were the results of a U.S.-led deception operation. I suspect Carrion’s interpretation is extremely likely to be accurate.

Carrion suggested in his book that motives for the operation included building global distrust for the Soviet Union while the world was speculating who was testing missiles over Europe. The primary objective, however, may have been to crack the Russian diplomatic code. This would have been accomplished in part through a method known as gardening, which involves creating circumstances of interest to enemy spies so that specific key words can be expected to be prevalent in coded messages, thus increasing opportunities to break the code. More complete understandings and context can be gained by taking other relevant circumstances of the era into account, many of which are specifically presented and sourced in the book.

In his latest blog post, Carrion outlined some particular points of his theory and added what he referred to as the smoking gun: A 1946 NYC-initiated strike of communications employees which significantly decreased available methods for Soviet intelligence agents located in the States to send messages safely to Moscow. Carrion reports that a resulting bottleneck of information flow created optimum conditions for American agents to gain access to encrypted Soviet messages. There are specific circumstances presented in ‘The Rosetta Deception’ in support of the likelihood, including the established and substantial presence at the time of the U.S. allied intelligence community in Stateside media and communications corporations, the very outfits which would have been relied upon.

Those who wish to debate Carrion’s perspectives on the ghost rockets were invited to do so. Read more about his challenge, including definitions of standards of evidence and the requirement that an actual theory must be put forth, in his related blog post.

Perhaps the biggest hurdle to accurately understanding intelligence operations, and particularly those that overlap with the UFO community, would be the failure to consider there is no all inclusive explanation. There is more than one reason the IC manipulated circumstances commonly perceived as related to UFOs. The purposes and objectives change from one specific circumstance to the next and cannot be discussed effectively in an overly generalized manner. Particular eras and specific cases should be considered independently of one another.

Consider, for example, a now declassified 1954 CIA memo in which agents were instructed to contemplate fabricating a sensational UFO story. The purpose of the potential fabrication was not in and of itself to deceive the public. The objective, according to the memo, was to divert public attention from Agency involvement in a Guatemalan coup.

If we neglect to seek such documents, we fail ourselves as researchers. We also fail as interested members of the public searching for accurate information.

If we perpetually subscribe to extreme beliefs, to either side of center, we increase the likelihood we are missing important data. That would be the case in arguing the IC was never involved in ufology, as well as limiting our perspectives to the incorrect assumptions that the only objectives must have involved either covering up an alien presence or the polar opposite of deceiving the public into believing aliens are among us. As Carrion suggests in his work and the 1954 CIA memo demonstrates, there are many potential objectives for UFO-related deception operations. Their intricacy would be par for the course, not the exception to the rule.

It appears to this writer that UFO-related deception operations conducted by the IC are reasonably a given. Their extents, specific circumstances and objectives are yet to be conclusively determined – not their existence.

It is important to understand that we must demand verifiable information in order to draw conclusions. Such conclusions cannot be found in passionate opinions or baseless arguments that go in circles but never reach resolution as is all too often the case within ufology.

We Have Seen the Enemy…

It has been said that propaganda is sometimes aimed at the media with the ultimate intention of influencing politicians and global leaders. If taken from that perspective, confused and misinformed members of the public might be viewed as little more than relatively inconsequential byproducts of some deception operations, at least to the powers that be.

Another way of looking at that would be to consider the IC may not be as responsible for the runaway beliefs attached to UFOs as much as the UFO community sometimes took a nudge and did the rest largely on its own. Among our biggest challenges as a community in search of accurate answers continues to be ourselves, or at least a segment of our community.

There is a leading segment of the UFO community that chronically seeks to perpetuate mysteries rather than solve them. They seek no prosaic explanations, and scrupulously avert from them at virtually all costs to logic and rationality.

Some of the mysteries that find their ways into UFO circles may indeed one day prove to be groundbreaking and of great interest. The vast majority will most certainly not.

It was not the IC that single handedly turned the “ghost rockets” into a supposedly alien-related cultural phenomenon that became perpetuated for over half a century. Neither was a Pentagon think tank solely responsible for such a large number of questionable UFO stories evolving into never ending sagas of mythical proportion. We did that on our own.

I recommend checking out the work of James Carrion. I think it is worth the time and attention. He operates the blogs ‘The Rosetta Deception’ and ‘Follow the Magic Thread’. Join and participate at his recently launched message board at Rosetta Deception Forum.