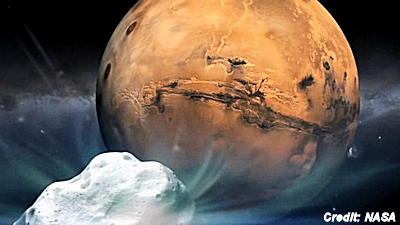 MARS: Rare Comet Encounter To Be Captured By Spacecraft

Â  Â  Â  A comet will hurtle past Mars next weekend, nearly missing the Red Planet but providing a once-in-a-lifetime show that will be captured by NASA’s fleet of spacecraft.

Comet Siding Spring will pass within 87,000 miles of Mars on Sunday, Oct. 19 — that’s about one-third the distance between the Earth and the moon.

The comet is expected to come closest to Mars at 2:27 p.m. ET that day, moving at about 34 miles per second.

NASA moved its fleet of orbiting vehicles so they won’t be impacted by dust particles from the comet. However, the fleet, including the newly arrived MAVEN, will be in a position to gather information about the size, rotation and gas composition of Siding Spring, agency officials said. . . .

Comet ISON is Back From the Dead! | VIDEO