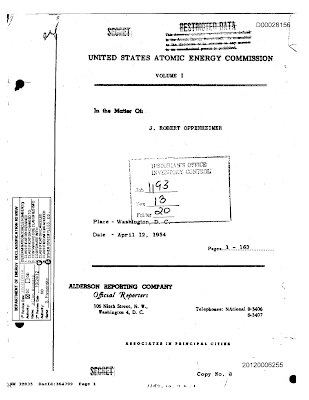 Â  Â  Â  The transcript of the momentous 1954 Atomic Energy Commission hearing that led the AEC to revoke the security clearance of J. Robert Oppenheimer, the physicist who had led the Manhattan Project to produce the first atomic bomb, has now been declassified in full by the Department of Energy.

â€œThe Department of Energy has re-reviewed the original transcript and is making available to the public, for the first time, the full text of the transcript in its original form,â€ according to a notice posted on Friday.

The Oppenheimer hearing was a watershed event that signaled a crisis in the nuclear weapons bureaucracy and a fracturing of the early post-war national security consensus. Asked for his opinion of the proceedings at the time, Oppenheimer told an Associated Press reporter (cited by Philip Stern) that â€œPeople will study the record of this case and reach their own conclusions. I think there is something to be learned from it.â€

And so there is. But what?

â€œNo document better explains the America of the cold war â€” its fears and resentments, its anxieties and dilemmas,â€ according to Richard Polenberg, who produced an abridged edition of the hearing transcript in 2002 based on the redacted original. â€œThe Oppenheimer hearing also serves as a reminder of the fragility of individual rights and of how easily they may be lost.â€

It further represented a breakdown in relations between scientists and the U.S. government and within the scientific community itself.