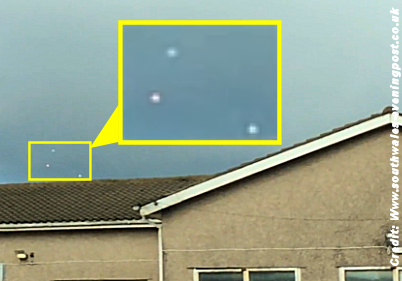 Have aliens invaded? UFO spotted over Swansea in convincing video

Â  Â  Â Even the most sceptical viewer has to admit that something funny is going on in this video.

“I was in the car park of the Cwmfelin Club when I noticed them,” Jason said.

“There was no reflection off my car or anything from me.

“They were hovering around in the clouds, and eventually two disappeared but one remained in sight, then it eventually went behind the clouds.”

In what Jason has assured us is a genuine video, you can clearly see the strange sparkling lights high in sky. . . .

‘UFO Sighting’ Over Wales Leads To Facebook Appeal for Witnesses