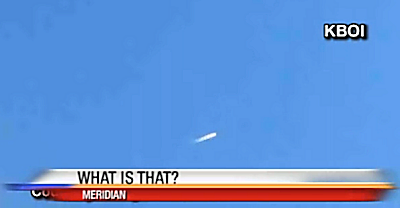 A KBOI 2News viewer shot the video and then soon after noticed an airplane with a contrail following the object.

The video was taken from the back porch of Kaitlyn Ellis’s home on Wednesday around 2:45 pm.

KBOI reporter, Morgan Wagner, went out to see what others thought about the flying object.

“That looks like a UFO,” Donald Merritt said. “I lived out in the desert and I saw a lot of weird stuff out there.”

But the Cadwells said to them it didn’t look unusual.