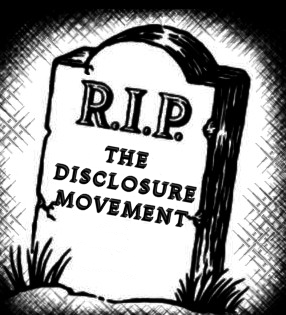 Â  Â  Â  It meant well, and it did its best, but the Disclosure movement is dead.

The problem with the Disclosure mindset was that it declared an end to the UFO enigma. It said, in essence, we know what â€˜theyâ€™ are: extraterrestrial spacecraft. End of story. And then the movement looked to officialdom â€“a sort of unfair parent figureâ€“ and it tugged incessantly at the leg of power, saying â€daaaaaadddd, TELL US!â€ And dad said, patiently as ever: â€œnot now kids, run along and play with your friends.â€

Well, dad never had the answers. He still doesnâ€™t. Sure, he may have a few more pieces of the UFO puzzle at his fingertips than do we, but heâ€™s ashamed to tell you that, try as he might, he just canâ€™t make those damn pieces fit. Despite appearances and the power of his ego, in a universe thatâ€™s 13 billion years old, heâ€™s just a monkey like the rest of us, flailing around for answers in the early years of the 21st century on a planet whose dominant trend is war. So, no, dad doesn’t understand what heâ€™s dealing with. He canâ€™t even comprehend it; and it doesn’t help that UFOs go far beyond the physical, beyond the merely extraterrestrial. Heâ€™s dealing with a coalescence of impossible phenomena. Heâ€™s dealing with consciousness itself.

And so what can daddy possibly tell the kids without appearing ignorant and confused, without losing a huge weight of his authority as a parent; as a leader. Itâ€™s better to stay silent and let the kids believe he has all the answers, that heâ€™s all-knowing.

Itâ€™s for this reason that should officialdom ever â€œcome cleanâ€ about the UFO issue, we should all be immediately and extremely suspicious, because UFO truth by way of official power structures will not be truth at all. We all know this. It will, by necessity, be whatever truth least vilifies and incriminates the secret-keepers, whose primary concern is not to bring about world peace through the disclosure of cosmic secrets, but rather to avoid at all costs being lynched by angry mobs for having withheld from the public incomprehensible data concerning the nature of our reality, and to maintain our existing global system â€“ a system in which the activities of the privileged few are concealed from the distracted masses. This is the system we vote for, year after year, decade after decade. The illusion of democracy.

If and when the day comes that the layers of our reality are peeled back and humanity collectively finds itself in a new world, it will not be for one signature too many on a Disclosure petition. Disclosure, if we must insist on using the term, is a slow process of personal awakening on a mass scale. When I say personal awakening, I most certainly do not mean the simple acceptance that we are not alone in the universe. I mean a continuing process of inner exploration.

All too often on the UFO scene audiences are content to hear what they want to hear; to have their existing beliefs confirmed by self-proclaimed experts who know full well that their personality cult is guaranteed by telling the crowds â€“dare I say â€˜followersâ€™â€“ only what they want to hear: that Disclosure is just around the corner, and that a brighter tomorrow will follow that day.

But the kind of revolutionary change we hope will be triggered by UFO disclosure can only ever occur from a bottom-up level, and over a considerable expanse of time. Enlightenment is earned slowly by the individual; it is not handed to him on a saucer-shaped platter. But then, itâ€™s easier to demand of a faceless bureaucracy than it is to demand of ourselves.

I should clarify I do not take issue with the Disclosure movement in itself. The efforts of Steve Bassett and others undoubtedly have brought the UFO phenomenon (whatever it might represent) to the attention of many thousands of people around the world who previously were indifferent to the issue. Thatâ€™s not a bad thing. What does concern me, however, is that Disclosure has become the focus of the UFO community, its alluring offer of a fast track to UFO truth marginalising the more esoteric approaches to the phenomena. In short, in the age of Disclosure and Exopolitics, the pursuit of UFO truth is political, rather than mystical. If the day ever comes when humanity can claim an understanding of the UFO phenomenon, Iâ€™m very confident that politics will have played almost no role in this enlightenment.

We should see UFOs, then, not as a call to pressure governments to unlock their files â€“ officialdom has nothing left to offer us on UFOs, nothing we can believe or accept. And free energy technologies, if they exist, will not save our world, because they will not miraculously change human nature. So letâ€™s take officialdom out of the equation altogether; letâ€™s shift the focus onto ourselves and to our own relationship with this phenomenon. Letâ€™s see UFOs as a call to look within, with the aim of unlocking our true mystical nature, our latent psychic and spiritual potential, because, in so doing, we might actually begin to understand all forms of extraordinary and impossible phenomena. Perhaps all that is required on our part is a recognition â€“or rather a profound acceptanceâ€“ that the distinction between an individual and the invisible beyond that surrounds her is entirely illusory.

The Idiocy of the Disclosure Movement

Bassett Doubles Down on UFO Disclosure