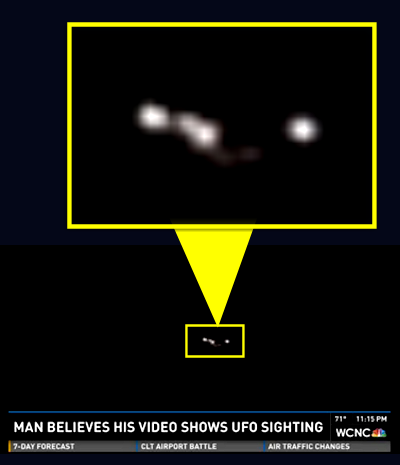 Â  Â  Â CHARLOTTE, N.C. — Picture going outside on a Saturday night, looking up in the sky and seeing what appears to be a UFO.

That’s what happened to Luis Rodriguez last weekend when he was taking his dog for a walk outside his apartment in the Arwen Vista Complex.

“Tried to make sense of it just like any other rational person would,” Rodriguez said. “I thought it was a plane or some sort of aircraft that was just flying really low.”

After watching it go across the sky he believes it was a UFO, a spaceship of some sort. NBC Charlotte sent the video to some experts at UNCC.

“Took a look at the video and it does look strange for sure,” said Catherine Qualtrough, Observatory Director and Astronomy Lab Manager. “Of course, normally in these situations, we find a simple explanation.” . . .