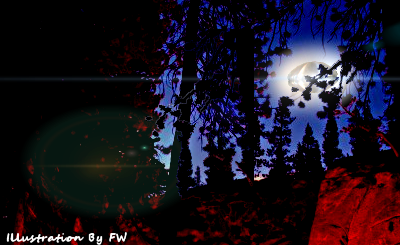 . . . The witness first noticed the UFO as looking like a bright star.

â€œAs I was looking towards the horizon, I noticed a very unusually large star giving off a lot of light. It was just above the horizon and visible through the trees. It appeared to be hovering in place, but as it clearly was moving I figured it had to be a plane.â€

But now the hovering object appeared to be moving.

â€œBut as I watched it as best I could through the forest, I noticed it was clearly changing its path and trajectory. It was ascending and descending, shooting left, stopping, hovering, and zooming left and up again. I pointed this out to my two buddies. I shined the flash light on it and said â€“ thereâ€™s no-way that could be a plane. We were all observing the object now. It was obviously under some kind of intelligent control, but wasnâ€™t making a sound.â€

One of the campers suggested they turn down their music to hear the object.

â€œAs we did that, the UFO started to descend. It was now below the tree line and began to come closer. Iâ€™m shining my light on it when the fear set in that this was not something that we could explain.â€ . . .

Hovering UFO Directs Beam of Light Down Onto Nuclear Missile Silo at Ellsworth AFB:
Retired ICBM Launch Officer Says Incident
Only One of Many Sightings at the Base