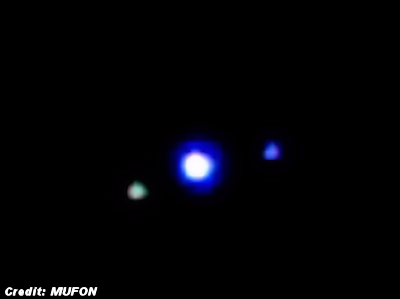 Â  Â  Â Witnesses in Holyoke, MA, reported watching and videotaping a series of â€œshape shiftingâ€ UFOs that moved in different directions for more than three hours beginning about 7:30 p.m. on October 14, 2014, according to testimony in Case 60610 from the Mutual UFO Network (MUFON) witness reporting database.

â€œI was outside on the porch with my boyfriend smoking a cigarette and we saw these bright white lights in a row,â€ the reporting witness stated.

â€œThen they turned red and blue and it was flying straight and then made a sharp U-turn, and then was flying in a figure 8. And every time it turned it was diagonal and you could see the diamond 3-d shape it was. And the craft was very dark. Looked kind of black.â€

The witnesses watched one of the objects flying over their building and then they began seeing objects all across the sky.

â€œAnd they would speed up toward the mountain and disappear in the mountain and about a minute later over to the right side of the mountain they would shoot up into the sky really fast â€“ changing light colors and formation â€“ from a single blinking red light to a long line of super bright white lights flashing. At the same time there were yellow-orange huge balls of light hovering and then they started floating straight up really high until they just disappeared.â€ . . .