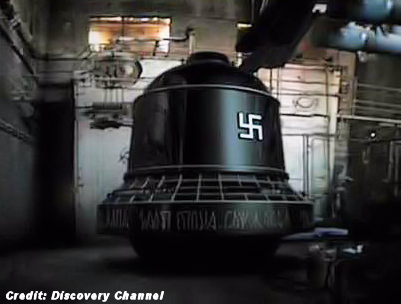 Roswell was not aliens – it was the Nazis, according to a German documentary

Â  Â  Â  A GERMAN TV documentary being screened on Wednesday night claims the mysterious UFO ‘Roswell Incident’ in the USA nearly 70 years ago was the result of experiments with ultra-secret Nazi rocket technology.

The Roswell Incident was reported on July 8 1947 in the town of the same name in New Mexico.

Initially thought to be the crash landing of a flying saucer, military authorities later said it was a downed weather balloon, but conspiracy theorists down the years have always insisted that the military was covering up an alien visitation.

But now a documentary entitled ‘UFOs in the Third Reich’ claims the incident was linked to testing of the ‘Bell,’ a copper coloured aircraft three metres in diameter, the core of which was a futuristic propulsion unit using electric particles.

The documentary screened on the N24 channel claims the craft was the forerunner of the Stealth fighter of today and was crafted by scores of V2 rocket experts who were spirited to America at the end of the war to give the USA the edge over the Soviet Union in rocket technology. . . .