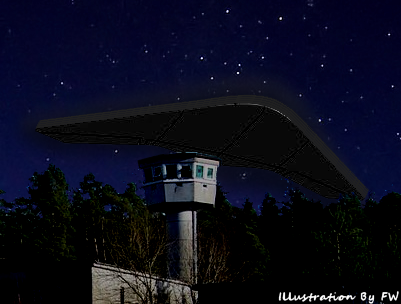 Â  Â  Â An American witness recalls an incident that occurred at the former Kriegsfeld Army Depot that housed nuclear weapons, according to testimony in Case 60648 from the Mutual UFO Network (MUFON) witness reporting database.

The witness was on guard duty Thanksgiving Day, November 25, 1982, in tower #5 in what was then West Germany.

â€œI observed a very dark triangular-shaped craft fly from the southwest over the valley, over the town of Gerbach, and directly over my watch tower flying in a northwest direction,â€ the witness stated. â€œI observed the craft for over 10 minutes as I picked it out over the horizon to the southwest.â€

Spotting aircraft was a common event.

â€œIt was a natural occurrence to see military aircraft on a normal basis during hours of daylight. I often observed A-10, F-4f, F-111 and OV-10 aircraft in the area and was quite familiar with all military aircraft of the era. It was a hobby for me to watch aircraft and could easily identify aircraft by sight and often just by the noise of their engines.â€

But this object was different.

â€œThis dark aircraft peaked my attention because it was flying very slowly and very straight. It was normal to see the aircraft that flew in that area to have some movement, however slight on all three axis of movement. This unknown craft flew as if it were on rails â€“ slow, steady with no appreciable movement outside of the northwest direction of travel until it actually flew above me.â€

The witness estimated the objectâ€™s distance.

â€œI would estimate that due to the height of my watch tower and the location of the Army depot on the highest hill in the area and perched at the edge of the hill where I could observe the valley that stretched out in front of me that I first saw the aircraft at least 15 km distant to me, possibly even further. It took at least 7 to 10 minutes for the craft to fly that distance until it was directly above me.â€ . . .

UFOs Allegedly Over Nuclear Weapons Depots in Soviet-Era Poland: One of the Unknown Objects Repeatedly Emitted a Light Beam Toward the Ground