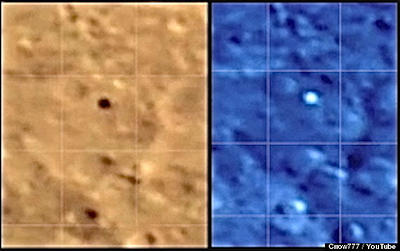 . . . Many videos have been posted to YouTube claiming to show a UFO or groups of UFOs flying across the moon. But what are we looking at?

To be sure, any object in the sky that cannot be identified could be considered a UFO. But something that looks like a spaceship might actually be a weather anomaly — or merely a hoax. The possibilities are endless.

“I see nothing to indicate that the object was computer generated. Having said that, the video also lacks anything that would have me believe the object is something other than a conventional satellite,” said former FBI Special Agent Ben Hansen.

“The sun’s reflection off the moon backlights the object, and we would expect it to look silhouetted, which it does,” Hansen told HuffPost in an email. “Regarding the ‘halo’ light the videographer mentions, a video artifact called ‘pixel bleed’or ‘color bleed’ is quite common, especially when the video is compressed in editing. The result is more noticeable with magnification and appears as if the edges of objects are blurry or extend beyond the boundaries of each pixel.”

Marc Dantonio, of FX Models, agrees with Hansen’s description of ‘pixel bleed.’ “I call it compression artifacting, but it amounts to the same thing: You get a halo around the object.” . . .